The core of navigation flows in Android apps centers around the Activity and the Intent. In this guide, we are going to review tasks, navigation, and how to manipulate these when navigating between activities.

This is typically used in cases where we need to exert more fine-tuned control over the behavior of the task stack which determines the "history" of our application.

Note: To skip to changing the behavior of the task stack, jump right to the [[Usage|Navigation-and-Task-Stacks#usage]] section of this document.

While the concept of using intents to launch activities should already be familiar to you, let's take a second to explore how launching new activities works and how this navigation is managed.

As we navigate around our app (or even between apps), Android is maintaining a task stack which tracks each step in the user's history. A task is a collection of activities that users interact with when performing a certain job. The activities are arranged in a stack (the "back stack"), in the order in which each activity is opened. By default, your activities in your app are organized as part of the same task affinity group.

When an application is launched from the Home Screen, the application comes to the foreground and the "stack" for that application becomes active. If no task stack exists for this application (first launch recently), then a new task is created and the "main" activity of the app becomes the first (root) item in the stack.

Each time an activity is launched in your app, that activity is pushed onto the top of the stack and becomes active. The previous activity remains in the stack but it is stopped. However, despite being stopped the system retains the state of the Activity UI automatically.

If the user hits "back", the current activity is popped from the top of the stack (and destroyed) and the previous activity resumes with the previous UI state restored. If the user continues to press Back, then each activity in the stack is popped off to reveal the previous one, until the user returns to whichever task was happening before this task stack began.

A "task" is a collection of activities stemming from a "root" application. This group is cohesive and when the user hits the home screen, the entire "task" is moved to the background until the stack is re-activated. While in the background, all the activities in the task are stopped, but the back stack for the task remains intact.

If the user were to open another separate application now, that app would have an entirely separate task stack that would come to the foreground. This means that multiple discrete stacks frequently are stored by the system. There might be several task stacks in the background and when the user re-enters the related application, that stack will reappear in the foreground with states restored.

This process of multiple task stacks is just the beginning. The real point of understanding comes from exploring what happens when we launch the same activity multiple times. Because the activities in the back stack are never rearranged, every time an activity is started via an intent, a brand new instance of that activity is created and pushed onto the stack.

This means that if you have an activity (say the timeline for twitter), and you launch the timeline activity multiple times using different intents, then multiple instances of that activity will be tracked in the stack. 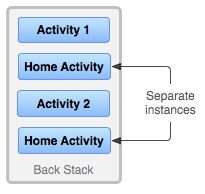 By default, if the user navigates backward using the Back button, each instance of the activity is revealed in the order in which they were opened (each with their own UI state).

See Tasks and Back Stack official guide for the source of the above content and additional details.

Activities within your application all belong to the same affinity group unless you define one differently using the taskAffinity XML property:

You can group activities together in this way to dismiss them all at once:

When using finishAffinity(), you may notice that the activity can still show up in the Most Recents screen. You can use the android:autoRemoveFromRecents flag to be true to remove it, which is normally set to false by default. You can also use finishAndRemoveTask() to accomplish the same effect.

The behavior described above works automatically and without any special configuration from the developer. The default behavior is to just place all activities started in succession in the same task and in a "last in, first out" stack.

However, there are cases where this behavior may not suit your needs. In the event that you want to tune or tweak this behavior, we need to understand how to change the behavior of our task stack. For example, we might want to:

In order to change this behavior, there are two approaches available:

If you always want an Activity to show a particular kind of behaviour then you will set the property in the <activity> element corresponding to that Activity in the manifest.

If you only want to exclude it from recent tasks under certain one-off conditions then you set the flag in the Intent and not the manifest.

The first approach to modifying the task stack is to set properties on the element within the AndroidManifest.xml.

To tweak the behavior of the Activity in the manifest, we want to set the launchMode attribute. This looks like:

Notice there we have specified the launchMode as "singleTop". There are four different "launch modes" to choose from that alter the task stack behaviors for that activity:

See the official guide for stacks for a more detailed explanation. This table may help clarify the different launch modes:

It might be useful to understand when various modes might be appropriate in an application. The following provides examples:

Check out the understanding launch modes guide for more detailed examples. Also check out this blog post for another explanation.

There are additional properties as well that can be set on an activity. For example, if an activity should not be added to the task stack at all, simply set the noHistory flag within the manifest:

Once this is set, that activity will never be a part of the stack even when launched. You might also want to check out the taskAffinity property as well as the allowTaskReparenting properties for more fine tuned control over the activity's behavior in the task stack.

The other approach to modifying the task stack is to set flags within an intent when starting an Activity.

The above can be very useful for login activities. The flags launch a new activity such that when the user presses "back", the previous activity would not show up. The following other flags are available to be set on the intent:

There are almost a dozen other flags you can set as well, for example FLAG_ACTIVITY_BROUGHT_TO_FRONT, FLAG_ACTIVITY_EXCLUDE_FROM_RECENTS, and FLAG_ACTIVITY_MULTIPLE_TASK. For a more comprehensive list, check out this article.

See the official guide for stacks for a more detailed explanation.